Home > Article > When Dealing With a Breakup, Try Deactivating All Your Social Media Accounts

It's sweeping, it's mysterious, it's drastic, it's everything necessary to feed the post-breakup id. It's also just practical.

When commitment feels rare and everyone's lonely, Change of Heart is a Valentine's Week investigation of what makes relationships so hard-and how they can be better.

Unexpected breakups (a bit of an oxymoron, as one party almost always Does Not Expect) are synonymous with chaos, turmoil erratic behavior, bad decisions; extreme hairstyle changes and other forms of rapid, anguish-induced reinvention.

In the aftermath-the days and weeks dedicated to wallowing in breakup agony or testing the boundaries of newfound, love-free freedom-it's easy to submit to the siren song of social media misbehavior. But what feels good to the breakup brain might not be ideal for public consumption. Sorry, but would you really have posted that video of yourself doing coke on 'Close Friends' if you were in a good place?

VICE has written about how to behave on social media in the wake of a breakup before. Today, I humbly suggest an alternative to soft blocks, subtweets and unfollowing Finstas: Deactivate your social media accounts post-breakup, have a trusted friend change the passwords, and avoid looking back for as long as you can stand it.

As a move, it's sweeping, it's mysterious, it's drastic, it's everything necessary to feed the post-breakup id. And best of all, it leaves behind zero lingering evidence for your followers to gawk at after the dust clears and you return to Earth (and regularly scheduled internet programming).

Deactivating your accounts also puts an end to any of the boring, post-breakup logistic maneuvering: Do you keep following them, and if so, do you still have to like all their pictures or watching their stories? Do you block? Mute? Delete DMs and archive posts, or preserve it all for the sake of looking chill and unbothered? Is it normal to take a picture of a tree and post it, or does that seem really desperate? These kinds of questions are tedious and are all totally self-inflicted. Put an end to all the uncertainty immediately and wipe your presence from the fucking internet.

This suggestion comes with a pretty big caveat: If social media is providing you with a genuine sense of connection and comfort in a time of grief, no need to unplug. "I think [detoxing from social media] can be really helpful, but I think it can also be slightly challenging," Jane Greer, a New York-based marriage and family therapist, told VICE. "People are not always aware of how attached they are to connecting, not aware of how much they turn to and rely on their contact with other people through social media."

Greer said if a patient told her they were considering deactivating their social media presence in the wake of a big loss, she'd ask how they feel when scrolling through their feeds. "Are they getting motivated by seeing what other people are up to? Did they see somebody out at a concert and say, 'You know what, I haven't been to a concert in a while. I'm gonna go'? It can be motivating. It can be inspiring." But if they found social media more draining than energizing, she'd suggest they take a look at why it's bumming them out so much-and make sure that deactivating won't make them experience even more FOMO.

When writer Hannah Victoria made her case for deleting Instagram after a breakup in an article for Medium's P.S. I Love You vertical, she said the move was sparked by a particularly heart-wrenching photo her ex posted. "In an instant, it made me feel like everything I had achieved was gone," she wrote. "The progress I thought I'd made didn't seem so valuable anymore. Had I really moved on if one photo could bring me down again?" I am intimately familiar with that twinge of pain, and the self-doubt that ensues. Nothing makes me feel pathetic faster than thinking, Holy shit, he went for a walk outside? We used to go on walks outside... 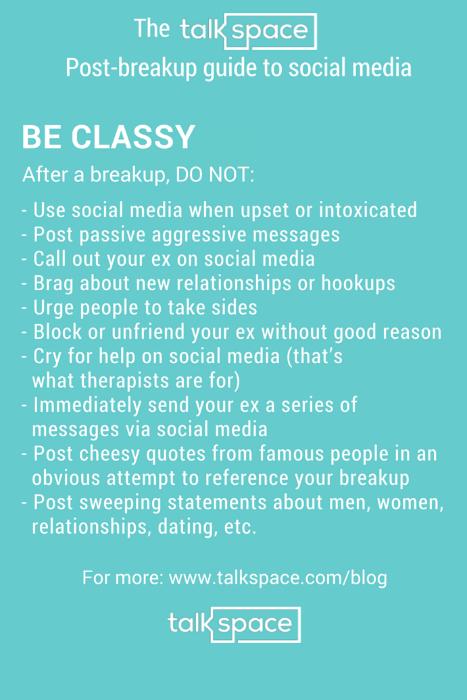 Spending too much time on your ex's social media can also, unsurprisingly, strengthen your fixation on them and prolong the healing process. This tracks, given the fact that social media is basically tailor-made for fostering fixations. I know I have spent a genuinely embarrassing amount of time lurking on

the profiles of people who've dumped me, looking for... evidence? Something I can use to reverse engineer an explanation for where we went wrong? I don't know!

I've wasted hours-maybe days, at this point!-on the profiles of men I don't care about anymore, time I could have poured into taking a pottery class, writing the next Great American Novel, or, at the very least, looking at stuff online that didn't actively make me angry and sad!

Of course, it's still possible to lurk on an ex even if you're technically "off" social media, but there's a difference between scrolling on mobile and accidentally seeing something, or even navigating to their profile once you're in the app... and opening a web browser, searching for their profile on Google, and waiting for the page to load. The amount of time it takes to do the latter (and the fact that you have to be so intentional about it) might be just enough help you actually resist temptation.

In the wake of a breakup, it's hard to maintain a level head online, let alone post anything close to "good content" on your own accounts. The jilted lover is likely to use social media to peer into other people's happy lives like a voyeur, or to compulsively "check on" their former partner as a proxy for preserving the real-life connection. Meanwhile, the freshly, happily single person may rush to take advantage of Instagram aka " the human menu," and fire thirsty DMs at random; post too many "funny" dating app screenshots; or over-perform the OK-ness they're definitely feeling-like definitely, seriously, no ambivalence-via a barrage of tweets or a five-minute Snapchat story. Messy either way!

Doing the big Log Off also puts an end to any discussion about who's "winning" the breakup. Deleting yourself squashes the urge to post in order to prove how "hot" and "cool" and "aware of what's happening with impeachment" you are-which is always a misguided impulse, more likely to leave you waiting for a simple 'like' than to deliver a devastating blow to your ex's psyche. Reminding them they have the capacity to date someone who's hot, cool, and subscribed to the New York Times? It's simply too tempting.

Also, what better way to keep your ex thinking about you than to become an enigma? Without the social media signpost to give people an approximation of your daily life ("Oh, cool, coffee"), you could be doing anything- you may know you're simply lying in bed and crying a lot, but in your ex's imagination, you are doing peyote in the desert and seeing God.

There is, of course, the risk that going completely dark on social media makes you look devastated. Well... if deleting all of your social media feels viable to you, you obviously ARE devastated. At least this way, you get to be devastated in the privacy of your own life.

Getting offline isn't a silver bullet in the hairy chest of heartbreak, but we already know its timeworn benefits: it may actually be the sleep-improving, mood-boosting, time-saving move that wellness influencers and tech CEOs claim it can be. According to a 2016 study published in the Journal of Happiness, more time spent on social media sites is linked to an increased sense unhappiness in people who reported already feeling lonely and dissatisfied with their social contacts-a mentality that likely sounds familiar to anyone who's mourned a relationship.

Frequent social media use has also been linked to depression and anxiety in young adults; excessive screen time (like, uh, staying up until 2 a.m. going through an ex's liked posts on Twitter) has been linked to sleep disturbances, thanks to blue light exposure; and Instagram's potential self-esteem lowering impact is so apparent, the company even tried taking away likes to remedy the problem. Do yourself a favor and give yourself space to heal in private. That way, when you do feel up to posting deranged butt pics or videos of yourself crying, you'll know you're doing it for yourself... or, at least, for attention from someone new.