Home > Article > 'The Contender' Lit Me on Fire. Now It's a Cringe Factory.

A movie about a female senator navigating a sex scandal felt revolutionary when a writer saw it in 2000. But its stab at feminism feels clumsy now.

Why I revisited " The Contender " this summer is neither here nor there because it could have happened at any time, such is the real estate that movie takes up in my brain - meaning I was always revisiting it somewhere in my mind, though it had been more than 20 years since I'd seen it. But this movie has been informing me, vexing me and haunting me since. Beware the movies you watch as you crest the peak of your coming-of-age, at the exact moment when you're sure you know everything.

A reminder, or an introduction: "The Contender," from 2000, is the story of Senator Laine Hanson, played by Joan Allen, who is up for confirmation as vice president when the playful but supersmart lame duck president (Jeff Bridges) loses the prior V.P. to death and needs to replace him in the final months of his term. The president is determined to put a woman in office, not just because she's a woman - though, that - but because he does not like the Republicans bullying him into nominating the more centrist Governor Hathaway from Virginia, who recently dived into the Potomac to unsuccessfully save a woman who had careened off a bridge.

We meet Senator Hanson when the president calls her on the phone to come in. She is, at that particular moment, on her back on her desk, having sex with her husband, who works for her. They're both still wearing their suits; it's the middle of a workday, after all.

As the confirmation hearings proceed, led by a Republican prude, Senator Shelly Runyon (Gary Oldman), the committee digs up something treacherous from Hanson's past: She, the daughter of a governor, allegedly had group sex as part of her sorority hazing in college. This supposedly took place in front of people, at a party, though photographs show just a body, not a face. Runyon and his committee receive this news with glee, leaking it to a tabloid and bringing up this scandal at every opportunity. The committee will not, Runyon insists, confirm her just because she's a woman, and he will specifically not confirm her because of the alleged group sex. The viewer is treated to phrases like "sexual McCarthyism" and "ideological rape of all women" and "cancer of affirmative action."

Well, I left the theater on fire. It was two years since I had bought the newspaper with the complete Starr Report in it and Could. Not. Believe. How. Dirty. The. New York. Times. Could. Be. I had my first job, an internship at a film company where I was asked by a guy in finance if I was a "full-service intern." I had watched the President Clinton sex scandal unfold, and I already had the lived experience to wonder what would become of the woman at its center and why people with the greatest amount of power can be rooted for as they decimate the people with the least.

The movie is laced with interactions between men and Hanson that seem either innocuous ("You look beautiful," the male White House chief of staff tells her before a news conference) or microaggressive ("Is that what you're going to wear?" the male press secretary asks her before the same event). Larry King expresses surprise when the senator chooses Thomas Jefferson as the historical leader she most admires. "A man?" he asks. Someone says to the president about her, "I'm just watching out for your girl." In her hearing, Hanson is asked if she would have more children, and if she could still have children, and what should the American people think of a vice president who might go on maternity leave? She answers those questions; she tells them she practices birth control. Those questions are the public's business, apparently.

Are you confused? So was I. Those interactions seem totally, rightfully planted as setups in a movie about the sexist way we talk to women, right? Well, I don't know! That same movie shows Hanson angrily warning Runyon in a private conversation that "if there's one thing you don't want, it's a woman with her finger on the button who isn't getting laid."

And, well, what about the fact that just about every woman in this movie is terrible? Governor Hathaway's wife, upon hearing that he's been passed over, berates him in a way that makes Lady Macbeth look like Tami Taylor. Even our sainted Senator Hanson, we learn, is married to her best friend's ex-husband, and there was some overlap - the would-be V.P. is a homewrecker! The men in the movie are far less tinged with complication - Runyon just wants the country to be a Puritan state because he loves righteousness. The president just wants to move the country forward because he loves progress. My question upon rewatching the movie is not only: How did I miss all this? But: How were the good parts of the movie ever enough for me? 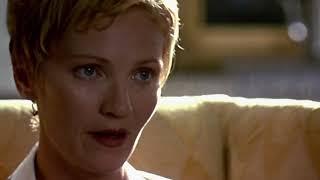 Those male characters are more fully drawn than Hanson herself - a character whose heroism lies in the fact that she never actually says much. The best way for a woman to proceed, if she wants dignity and success, according to this movie, is to do it quietly.

As I waded through the microaggressions and slights without ever understanding for sure if they were intentional - it's unclear if the movie supposes that it's wrong to tell women that they look beautiful at work - I remembered that somehow this story was put into a man's hands (it was written and directed by Rod Lurie) and lauded as a corrective to the Clinton scandal, meaning that it seemed to bolster the idea that a person's private life is his or her private life.

I've been working in journalism since I left college. I know that work doesn't age well - that there is a direct one-to-one exchange on how relevant an article is when it's published to how much you're not going to brag that you wrote it years later - with lines you wrote just for humor's sake and questions about a person's past, body or addictions that you hadn't had the sense to realize were out of bounds. Or even if they technically weren't, that you should have avoided them entirely nonetheless out of decency. I wrote articles where I believed I was on the right side of history and it often took seeing them in print, or revisiting them years later, to realize how horrific my points of view were.

But that's not my main point here; my main point is that I sat watching "The Contender" in 2000, at the age of 24, thinking that if a direct response to the sexism of the moment could land in theaters, that we had reached peak progress as far as feminism was concerned.

But what was I cheering? What was that movie really about? Was it about how women are received in the world? Or was it about not being allowed to ask Bill Clinton about his sex life? Wait, was this a pro-Clinton movie in the end?

And yet, it was progress - at the time, at least. To hear Hanson say that there were questions you couldn't ask her, that her life was personal to her, that the world didn't have the right to judge her for it, that was something I'd never seen before. It left me reeling with possibility. But I didn't know that one day, I would not be able to discern if its microaggressions were intentional. I didn't know that one day I would read my own work and realize that stories I had set forth as examples of the way the world moves forward would be offensive in their own right. The point is that if you live long enough, even the most progressive idea will be anachronistic, and you'll be the jerk who once put it out there. We call that all kinds of bad things today, but, in fact, that's actually what's called progress.

Back then, I didn't imagine there was any more progress to be had. I arrived here, in 2021, now finding "The Contender" adorably, offensively retro and wondering if what I think of as subversively progressive now will seem old-fashioned in 20 years. I wondered what I would think of this movie if I were younger and forced to watch it. I'd see how there were no nonwhite characters or sense of intersectionality; I'd watch the central character - the one on the movie poster - do nothing and say almost as much for an hour-and-a-half and I'd turn it off.

Progress, it turns out, is not something to arrive at; its most robust presentation is the understanding that you'll never reach it. No, it's the understanding that you'll never reach it and that you cannot predict why from the moment you're standing in. In that way, "The Contender" is the essence of progress. So are my dumb old magazine profiles; so is this essay, probably. That's what progress is. It's the ability to look at what you loved 20 years ago and regard it with disgust.

Some good news is that, in a small pocket of the world that a movie like "The Contender" represents, things are getting better. That you shouldn't ask a woman about her sex life when she's up for a job is now something you can greet, with certainty, as an old idea; a woman could be given thousands of words worth of space in a newspaper these days, and she'll still file with more words than assigned (this is a public apology to my editor).

What good news it is to find "The Contender" to be old-fashioned and quaint. In the movie much of the terrible work done both to undermine Hanson and to confirm her because she's a woman is done in the name of "our daughters." It turns out that you have to have so many men embracing progress in the name of their daughters (which is good) before they're berated into pushing for progress because it's just what you do (which is better).

In the end, the movie doesn't have the courage of its convictions. It allows Hanson to sit with the president on the back lawn of the White House, smoking a cigar the president hands her, as she finally reveals to him what the movie has seemingly promised it wouldn't resolve: That the story wasn't true. That she didn't have sex with those boys; that it was just urban legend. A movie where she doesn't have to ever answer the question was an idea whose time had not yet come.

Here is how "The Contender" finishes: With a rousing speech by the president to Congress - a Congress that loves him so much that each side cheers for almost every word. The president announces that Senator Hanson has withdrawn her name in the interest of making the transition peaceful, but he will not accept the withdrawal. No, the president moves for immediate confirmation, which it's clear he's going to get, if everyone could stop cheering for him for a minute. I remembered it as a moving scene. Now, all I could think was that she had withdrawn her name for a reason. This wasn't what she had wanted at all, but no one asked her because no one really cared.