Home > Article > Kenyan men join battle to end FGM
Warning: Some readers may find parts of this article upsetting John can barely remember a time when having sex with his wife did not end with her in tears.

It was just too painful because she had undergone female genital mutilation (FGM).

"Anytime I go to Martha, she recoils, curling like a child. She cries, begging me to leave her alone. She doesn't want to have sex any more," the 40-year-old says.

Although FGM is illegal in Kenya, girls in their community often undergo FGM between the ages of 12 and 17, as a rite of passage in preparation for marriage.

Martha was cut when she was 15.

Sex as an endurance test

"It is painful when we have sex. I wish this practice would end," she says, adding that it had also made childbirth very difficult for her.

Recounting their first sexual experience, the couple describe it as traumatising.

Martha says she felt a lot of pain and it is not how she had imagined sex would be. She had to ask her husband to stop.

"I didn't realise a part of her [vulva] had been stitched, leaving only the urethra and a tiny vaginal opening," John tells the BBC.

"I try to be very compassionate with my wife. I don't want her to feel like I don't respect her, yet we are a couple."

They lived in agony with little hope that things would ever change - not just for them, but they feared for their young daughter as well.

That was until John heard of an anti-FGM campaign meeting in his village, targeting men.

He says it awakened him to the dangers the practice posed to women. It changed his attitude and he learned that as a man, he could help stop it.

"After all, it's men who have a say about children and if I say my child will not be cut, then she won't be."

It is a transformation Moses and his wife Josephine, also members of the Marakwet community, have embraced.

The couple, married for close to 25 years, have also had a difficult sex life because of FGM.

Josephine was cut at a young age and describes their sex life as an endurance test.

"It is always painful but I have learnt to persevere through it." 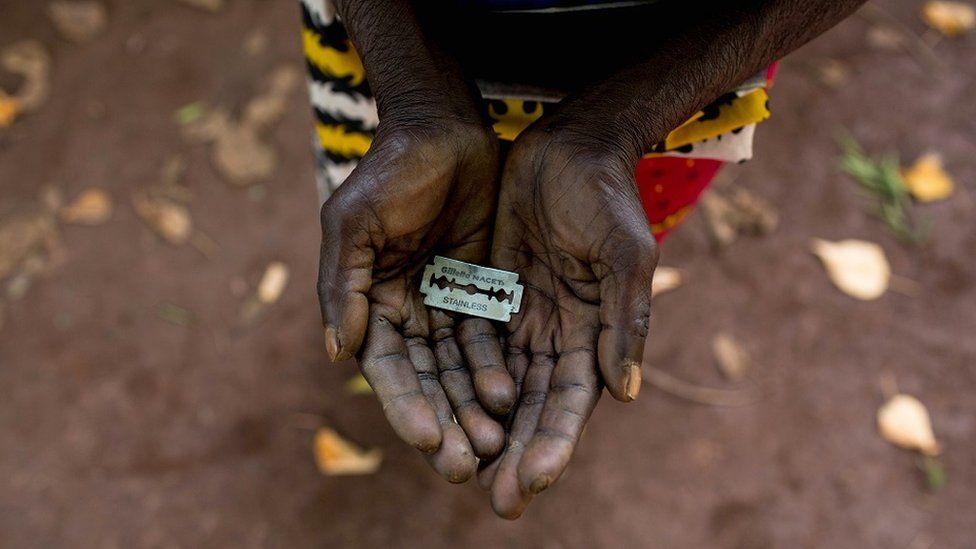 Josephine says the couple thought they were alone in their struggle until they met other couples who were struggling with similar challenges.

Discussing sex and related topics such as FGM is still taboo in many Kenyan communities, especially among men.

"No-one told me anything about having sex, especially with an FGM survivor. Even now, it is considered a private matter," John says, laughing at the suggestion that sex could be discussed openly in his community.

Moreover, men who speak against FGM can be seen as traitors, attacking a long-standing cultural practice.

In 2014, it was estimated that four million Kenyan women, around a fifth of the female population, had undergone some type of FGM. In most practising communities, it is considered a prerequisite for marriage.

"In the olden days if one refused to undergo FGM, they would never find a husband," Josephine says, "and if they did, they would never be fully accepted in that homestead. They would be returned to their family, bringing shame and ridicule to their people."

Dr Tamarry Esho, who researches FGM and campaigns against it, says that of Kenya's 42 recognised communities, only four have not historically practised FGM.

And some still do.

"This is a deep-rooted cultural practice. A lot of people still feel like it's their right," says Dr Esho.

'Men are the decision-makers'

But attitudes in many communities have changed and Kenya is seen as being among the more progressive countries in Africa on the issue. Just over one in 10 adolescent girls aged between 15 and 19 are now estimated to have undergone FGM, down from almost 50% in 1974.

Tony Mwebia, founder of the Men End FGM foundation, which trains community champions to tackle FGM, says that men can make a difference.

"In FGM-practising communities in Kenya, while it is women who cut fellow women, men are the decision-makers. However, they have no idea what is cut, how it's done and what damage is caused to women.

After attending the anti-FGM meeting, John decided that his daughter would not be cut.

He was also able to articulate something he says many men are not willing to admit.

"FGM affects men too. Many are in [emotional] pain but simply persevere. Some cultures say FGM reduces women's alleged promiscuity. FGM only reduces the love between a man and his wife."

For women like Josephine, having male allies makes all the difference, especially in a patriarchal society.

"We once felt powerless, not any more. As a survivor, when my husband says he doesn't want FGM for our daughters, I'm happy. Our neighbours have also followed suit. They say their daughter won't be cut."

*The names of the couples interviewed for this article have been changed to protect their identities.

The four types of FGM:

Type 1: Clitoridectomy. That's the total or partial removal of the sensitive clitoris and its surrounding skin.

Type 3: Infibulation. The cutting and repositioning of the labia minora and the labia majora - the outer skin folds that surround the vagina. This often includes stitching to leave only a small gap.

Type 4: This covers all other harmful procedures like pricking, piercing, incising, scraping and cauterising the clitoris or genital area.