Home > Article > First Look Pictures Are Here For "Sex Education" Season Three, And I Am Positively Screaming With Joy

Will this be the season of "Maetis"? 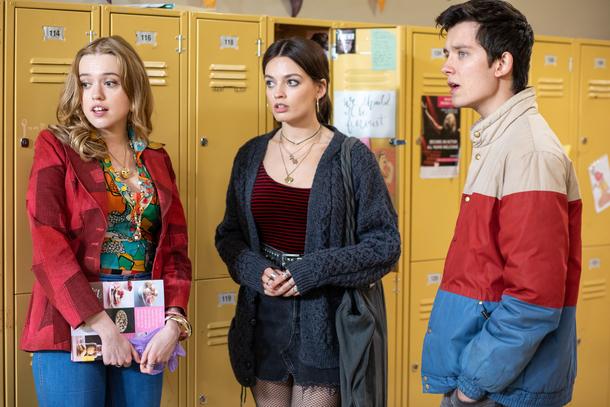 I think I speak for nearly everyone when I say that the third series of Sex Education is longggg overdue.

At the end of season two, viewers were left asking A LOT of things. Firstly, is Jean going to be able to continue working as a sex therapist? Will she go through with her pregnancy? Are Eric and Adam truly endgame? Who is going to take over the school? And will Otis and Maeve EVER get together???

Well, we now have an idea of what's to come in season three of Sex Education thanks to newly released pictures from the great and powerful Netflix.

Otis is now enjoying having casual sex, since Maeve still has no idea how he feels about her.

Jackson gets a crush, but on whom we still don't know.

As well as Jemima, there are several new additions to the cast including Harry Potter's Jason Isaacs as Peter Groff, Mr Groff's more successful and not at all modest older brother!

Check out more pictures below and let us know in the comments if you're looking forward to the new series!UPDATE: Check out the trailer for series three below! YAY!Sex Education will return to Netflix for a third series on 17th September with eight brand new episodes.
Tags： sex education