Home > Article > Dan Savage has been dishing out sex and love advice for 30 years. Some questions still surprise him.

In the early 1990s, Dan Savage met Tim Keck, one of the founders of the Onion, who was moving to Seattle to start a weekly newspaper called the Stranger.

"You should have an advice column," Savage told Keck. "Everybody reads those."

Keck responded by hiring Savage to write it.

Thirty years later, the column is still going strong, running in newspapers all over the world - plus he hosts a podcast and has written several books. Savage has become a cultural force in the world of LGBT rights, sex, love and relationships. He has coined new words and ideas for how to be intimate and adventurous, and how to redefine commitment as relationships evolve. The Post spoke to him about this accidental career he loves. The following interview has been edited for clarity and length.

A: I used to get questions like "Is this normal?" "Am I normal?" all the time. The answer was usually: No, it isn't. But so what? It doesn't matter. I think 30 years of me hammering away at it, but also other people hammering away at it - and also Internet pornography - made it clear to everybody that, when it comes to human sexuality: Variance is the norm. The more unique and personal sex is to you, the more normative that is.

What's really different now, is I get a lot of questions about situational ethics: I did this. The other person did that. I want this and there's a conflict. Or: The parameters of our relationship have changed, and we need to reverse-engineer our relationship so we're happy now. All that stuff is so much more complicated to write about and to help people address.

Q: A lot has changed in the world of sex, love and relationships in 30 years. What changes would you still like to see?

A:Oh my God. No one's asked me that question. I used to hammer away at wanting to see marriage equality. I have been hammering away at the need for comprehensive sex education, and we still don't have it. If there's anything that would benefit everyone, it would be comprehensive sex education that talks about consent, that talks about the existence of queer people, and talks in a smart way about gender. Even what a lot of progressives or liberals look at and think "this is good sex education" is usually just reproductive biology. That's easy. You can cover that in an hour. And most parents do: with their children, because children are curious about how they came to exist.

The comparison I've always used is: Imagine if driver's education was just the internal combustion engine and how it works. It didn't cover steering, brakes, red octagons at the end of the street, what a yellow light means. If that were driver's ed, the first time somebody got in a car, the odds that they were going to hurt themselves or someone else would be high. Our sex education is basically the reproductive internal combustion engine. It doesn't talk about steering, brakes, red octagons, yellow lights. It doesn't talk about anything where it gets complicated, which is usually where people get hurt.

Q: So you're saying that comprehensive sex education is more controversial than marriage equality.

A: And more controversial than ever! One of the tools you would come out of the sex ed program that I would design is: Part of talking about sex with someone is telling them that they can say no to you. Not only can someone say no, you should ask someone if they would like to - in case they want to and don't feel comfortable saying that. You don't want to realize like a week later that something happened that the other person felt violated. 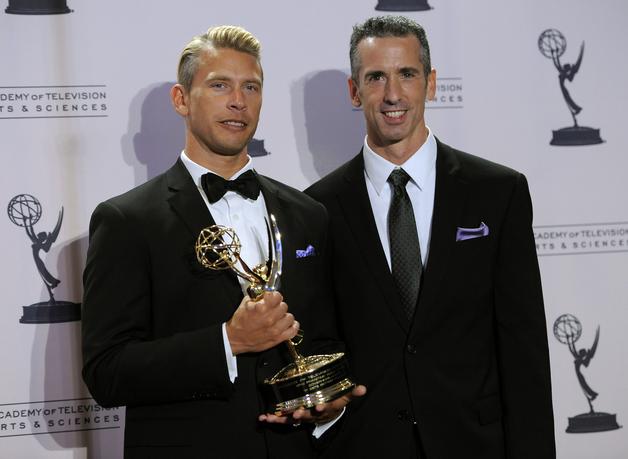 I write about the four magic words, which are: "What are you into?"That is the question that I, as a young gay man, was asked by my first sex partner. It was incredibly empowering, because I could rule anything in and anything out. Straight people should steal "What are you into?" from gay people the way we stole marriage from them.

Q: During the covid-19 pandemic, masks have been compared to condoms, as both can prevent transmission of disease. What has the pandemic done to our sex lives?

A: I'm 56 years old. Gay men who are a few years younger than me, many of them didn't experience the AIDS epidemic like gay men my age and up. And there have been eerie echoes all through the pandemic of HIV/AIDS. A big difference is: The risks we took when we had sex and continued to fall in love in the face of the AIDS epidemic were ours alone. The risks you take now, you impose on everyone around you. I'm old enough to remember when religious conservatives, Republicans, evangelicals lectured gay men about how selfish we were that we were still having sex in the middle of the AIDS epidemic. These are the same people, demographically, some of the same people literally, who refuse to wear masks and scream "freedom." That's not what they said about gay men who refused to wear condoms.

A:I got one a month ago and I actually put it up on Twitter before I answered. A guy in his 20s brought his boyfriend in his 30s home to meet his parents. It came out that his parents, a decade ago, when they were in their 40s, had had a three-way with the boyfriend when he was in his 20s.

A: It's a small world. It really is. I apologized to the letter writer because I had helped create a world where married couples could have three-ways with younger men. I'm always telling long-married couples: When you first meet, you're the adventure they're on. And they're the adventure you're on. And then a decade in, people are like "Oh, where's the spark?" They think something's wrong. It's nothing wrong with the relationship. It's just you can't be someone's adventure forever. You're trading security and familiarity for intensity of eroticism. If you want to get back to that place where something feels like an adventure, you have to go on an adventure together. Doesn't mean you have to have three-ways with men who might grow up to marry your son. It just means that you're challenging each other and taking risks.

Q: You've coined a lot of terms over the years. Do you have a favorite?

A: I'm particularly fond of " monogamish," just because so much of what you do as a sex and relationship columnist is tinker with the machinery of monogamy. Non-monogamy and monogamy were such binaries. We needed something in between monogamous and open - and that's really what monogamish is. You can use it to mean everything from "we occasionally have sex with other people, but mostly with each other we have sex" to "we just acknowledge that of course we're attracted to other people."

Q: It's been over a decade since you and your husband, Terry Miller, recorded that video telling LGBT teens that "it gets better" beyond high school. If you were to give a new message to young people that relates to their mental health or sexuality, would it be "it gets better," or something else?

A: Post-Trump and world-on-fire, it feels crazy to say "it gets better," right? But I still believe it. "It gets better" is never passive. It gets better because you do something about it.

Part of what I always say to young people is: "You don't have to show up to get punched in the face." I've gone crazy viral on social media a few times, and I have been dogpiled from the left and the right. I don't scroll through my mentions, reading every hateful thing. I go to a movie. I bake a cake.

I see people who are traumatized by getting grief online, and my advice is always: "Turn off the computer and wait two days," and there will be a different storm. If two days later, there's something that you feel you need to apologize for, then you can do it.

Q: Who do you go to when you need advice with a personal problem?

A: I used to go to my mom. She was one of the inspirations for Savage Love. In the years since my mom passed away, I have friends I go to. I talk to my older brother, Billy. I talk to Terry. Terry and I have been together a long time, and there's no one on Earth who knows me better than he does, loves me more and hates me more. That's what almost three decades with someone means. There's nobody who writes an advice column who hasn't had a million "physician, heal thyself" moments, where somebody that you're confiding in starts basically quoting you back to you, telling you what you need to do.

Q: Is there anything else that you'd like to add that I didn't ask about?

A: One question I sometimes get is: "How long are you going to do this?" I'm in my office, sitting at Ann Landers's desk, that I bought at the auction of her effects. And like her, I will have my column pried from my cold dead hands one day. It's just too much fun. It's a job that gives you all the feels.

A previous version of this article misquoted Savage as referring to "long-unmarried couples" instead of "long-married couples." The article has been corrected.

Co-workers are still hooking up, office or not How has the pandemic changed dating? Here's 7 tips for getting back out there. Kyle is transgender. It took 30 years and a pandemic for them to realize it.
Today's Headlines The most important news stories of the day, curated by Post editors and delivered every morning.
Tags： sex education