Photo by Colin Anderson via Stocksy

When perfectly legal businesses are blocked from actually making money by banks and services like PayPal, our cultural acceptance of sex is pushed further into the fringes.

On May 24, Genevieve LeJeune attempted to withdraw money from her HSBC business account. Her card was rejected. She immediately logged into her account online to figure out what was going on and was greeted with a message letting her know the account had been closed. "I had over £20,000 that I couldn't access and no information about how I was going to get it back. As a small business, that's crushing," LeJeune said.

It was the second time in 2019 that the bank had frozen LeJeune's business account without warning. After she had called to complain in January, HSBC reinstated the account, but this time, there was no way around the situation. On June 3, after filing three complaints, LeJeune received a check for the full balance, along with a notice stating that the termination of her account was final. Although the HSBC's explanations were vague, they referenced what had appeared to be a routine inquiry into the nature of LeJeune's business the previous September. (When reached for a response, an HSBC representative said, "Any decisions to close an account are taken on a case by case basis.")

The nature of Skirt Club has put LeJeune at odds with financial institutions ever since she founded the members-only social club for queerbisexual women in 2014. Skirt Club's primary draw is its signature parties, in which participants gather in a secret location to watch burlesque, listen to presentations on topics such as Japanese rope bondage, and, if they so choose, have sex with one another. It currently has 12,000 members worldwide in cities including Los Angeles, New York, Berlin, and Sydney. Members often use the network to meet up outside of Skirt Club events, which also include more casual mixers and weekend getaways to Ibiza and Miami.

According to Bradbury, these incidents have ramped up dramatically since March 21, 2018, when the Stop Enabling Sex Traffickers Act (SESTA) and the Allow States and Victims to Fight Online Sex Trafficking Act (FOSTA) passed in the Senate. FOSTA/SESTA holds third-party websites such as Craigslist and Backpage accountable for anyone who might be soliciting sex through their platforms. Although the legislation ostensibly combats involuntary human trafficking, activists have widely condemned it for endangering the lives of sex workers by making it difficult for them to organize and protect one another. A ripple effect has been to usher in a more repressive era of the internet, one in which websites such as Tumblr have banned adult content, Patreon is kicking off adult performers, and financial institutions are clamping down on businesses even remotely connected to sex.

Soliciting paid sex through Skirt Club is prohibited and while its promotional materials feature lingerie-clad women, they're no racier than your average Victoria's Secret commercial. In China, where safe spaces for queer women are limited, Skirt Club provides a discreet haven. In the United States, its comparatively mainstream appeal makes it accessible to women who might be intimidated to enter a lesbian bar. "I don't regard Skirt Club as a sex party. I see us as a community," LeJeune said. "Therapists have pointed their clients in our direction because they view us as a safe space for women who are unsure of, or want to experience more of their sexuality." 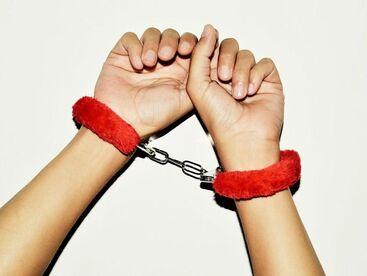 None of that matters to companies like PayPal, which prohibits "certain sexually oriented materials or services." The payment processor froze Skirt Club's assets for six months while LeJeune was still getting the business off the ground. (In a statement, a representative for PayPal wrote, "PayPal is available as a payment option for the sale of certain types of mainstream adult digital content. We work with approved merchants who consistently adhere to PayPal's Acceptable Use Policy, applicable laws and regulations.") And on June 28, just weeks after HSBC closed her account, LeJeune received an email from Stripe, her online credit card processor, informing her that it would no longer do business with Skirt Club. "In this case, certain aspects of your business fall under the 'Adult content and services' umbrella term of our Restricted Business List," reads the email from Stripe's support team. On a personal note, the representative added, "What you're doing is extremely important for the [LGBTQ] community, and I hope you find a payment processor that is perfectly suited for your business."

"If women who are exploring their sexuality can't find Skirt Club or any empowering content about sex on major platforms, we're going to be living in an internet age straight out of some puritanical Handmaid's Tale society," Bradbury said. "If everything is shunted into corners of the internet where you have to know about it to access it, it only perpetuates the idea that this is something shameful."

Though Mistress Harley, a pro domme, operates as a legally registered LLC, pays her taxes, and can count the number of chargebacks she's received on one hand, she remains in the high-risk category to banks and can rattle off half a dozen payment platforms that have frozen her assets or closed her accounts. Instead, she's forced to use high-risk merchant account services that take a 20 to 40 percent cut of transactions.

Rigid morality-based policies can also present problems in securing venture capital funding, as Polly Rodriguez, founder of the sexual wellness company Unbound and co-founder of the group Women of Sex Tech, discovered. While the exact nature of these agreements with limited partners (LPs) vary, they can cover anything traditionally associated with vice and often include cannabis companies, tobacco, firearms, and the adult industry. At age 21, Rodriguez was diagnosed with colorectal cancer. Radiation treatments sent her into early-onset menopause, causing her sex drive to plummet. After struggling to find a sex toy store where she felt comfortable, she went ahead and launched her own. Finding venture capitalists willing to invest in Unbound was difficult, and it took four years for her to secure a working capital loan from a bank.

"In venture capital, there's often a vice or morality clause barring investment in certain categories of businesses," Rodriguez said. "As we've gotten bigger, more institutions have been willing to look at our financials and see we that we don't have a high chargeback rate and that we have consistent revenue. It takes a lot of effort to find someone who understands that this industry is evolving and maturing."

Miss Harley said that recent legislation has led banks (and tech companies like Facebook, Skype, and Google) to become increasingly wary of anything that could be construed as sexual content, as well. "I've seen bloggers and people who write about sex education, like Violet Blue, having their accounts shut down. She's just a writer," Mistress Harley said. "At what point is everyone who purchases adult material, creates adult material, or even talks about adult material in this red zone?"